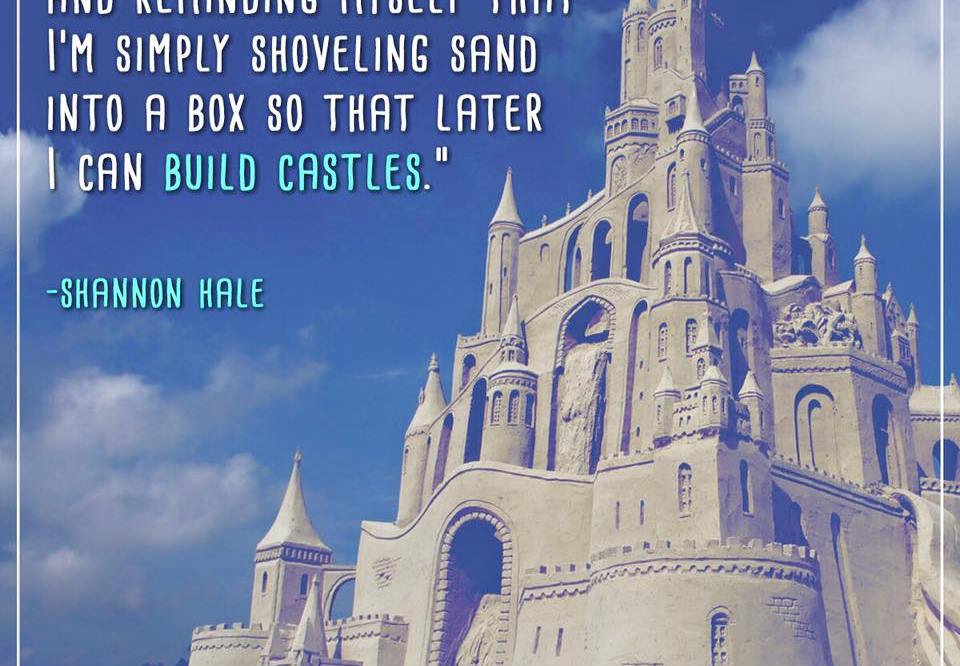 So this image popped up in my Facebook feed last week from the Palmetto Publishing Group.

If you’re imagery-challenged and like to focus more on words (and, let’s be honest, words are far prettier anyway), here’s what it says:

“I’m writing a first draft and reminding myself that I’m simply shoveling sand into a box so that later I can build castles.”

What a terrific phrase … and how true it is.

I regularly run workshops to help corporate-types write more effectively in the workplace – everything from online and social through to PR communication and media – and in every single workshop, this phrase comes back from people.  They constantly fall for the myth that a final draft comes first.  It doesn’t. Never has. Never will.

That stops them in their tracks. A final draft is polished, reads well and catches the eye. Who can produce that?

Writer’s block is a concept that means you’re unable to proceed with your writing. Many times that’s because of final draft fear – that blinking cursor on screen (or the blank page if you’re committed to using Dead Tree Media) dares you to places your fingers on keys (or pen to page) and deliver something worth reading.

But here’s the thing: if you understand that a first draft is just shoveling sand, or collecting the materials from which you’ll build your masterpiece, it makes writing your first draft so much easier, and your destination of a final draft that much more reachable.

I’m ploughing my way through my second manuscript at the moment (I still can’t talk about my first one as it’s still in the final for the American Christian Fiction Writers Genesis competition), and this one concept of shoveling sand is making it so much easier to finish the first draft. Already I’ve got a raft of notes that I’ve made to one side that I will address when the first draft is done.  They relate to character quirks, conflict or drama, but I’m uncluttering my writing process to separate the writing from the editing.

When you start to try to edit your first draft as you go, you do a number of things that aren’t helpful:

So that’s why I think shoveling sand or collecting materials is such a strong visual hook on which to hang your story.  It enables you to plough through, while still retaining the right to change it down the track and make it the best story it can be.